Life is full of random events!

You need to get a "feel" for them to be a smart and successful person.

The toss of a coin, throwing dice and lottery draws are all examples of random events.

Independent Events are not affected by previous events.

This is an important idea!

A coin does not "know" it came up heads before.

And each toss of a coin is a perfect isolated thing.

Example: You toss a coin and it comes up "Heads" three times ... what is the chance that the next toss will also be a "Head"?

What it did in the past will not affect the current toss!

Some people think "it is overdue for a Tail", but really truly the next toss of the coin is totally independent of any previous tosses.

Saying "a Tail is due", or "just one more go, my luck is due to change" is called The Gambler's Fallacy

Of course your luck may change, because each toss of the coin has an equal chance.

"Probability" (or "Chance") is how likely something is to happen.

So how do we calculate probability?

Example: what is the probability of getting a "Head" when tossing a coin?

Number of ways it can happen: 1 (Head) 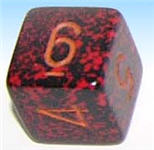 Example: what is the probability of getting a "4" or "6" when rolling a die?

Probability goes from 0 (imposssible) to 1 (certain):

It is often shown as a decimal or fraction.

Example: the probability of getting a "Head" when tossing a coin:

We can calculate the chances of two or more independent events by multiplying the chances.

Example: Probability of 3 Heads in a Row

For each toss of a coin a Head has a probability of 0.5:

So each toss of a coin has a ½ chance of being Heads, but lots of Heads in a row is unlikely.

Example: Why is it unlikely to get, say, 7 heads in a row, when each toss of a coin has a ½ chance of being Heads?

Because we are asking two different questions:

Question 1: What is the probability of 7 heads in a row?

Question 2: When we have just got 6 heads in a row, what is the probability that the next toss is also a head?

Answer: ½, as the previous tosses don't affect the next toss

You can have a play with the Quincunx to see how lots of independent effects can still have a pattern.

So, for Independent Events:

Example: your boss (to be fair) randomly assigns everyone an extra 2 hours work on weekend evenings between 4 and midnight.

What are the chances you get Saturday between 4 and 6?

Example: the chance of a flight being delayed is 0.2 (=20%), what are the chances of no delays on a round trip

When we add all the possibilities we get:

They all add to 1.0, which is a good way of checking our calculations.

Imagine there are two groups:

What is your chance of winnning the big prize?

Many "Coincidences" are, in fact, likely.

Example: you are in a room with 30 people, and find that Zach and Anna celebrate their birthday on the same day.

Why is the chance so high?

Because you are comparing everyone to everyone else (not just one to many).

And with 30 people that is 435 comparisons

Did you ever say something at exactly the same time as someone else?

But you were probably sharing an experience (movie, journey, whatever) and so your thoughts were similar.

And there are only so many ways of saying something ...

... if you speak enough words together, they will eventually match up.

So, maybe not so amazing, just simple chance at work.

Can you think of other cases where a "coincidence" was simply a likely thing?