Data can be "distributed" (spread out) in different ways.

But there are many cases where the data tends to be around a central value with no bias left or right, and it gets close to a "Normal Distribution" like this:

The blue curve is a Normal Distribution.
The yellow histogram shows some data that
follows it closely, but not perfectly (which is usual).

We say the data is "normally distributed":

The Normal Distribution has:

The Standard Deviation is a measure of how spread out numbers are (read that page for details on how to calculate it).

When we calculate the standard deviation we find that generally:

Assuming this data is normally distributed can you calculate the mean and standard deviation?

And this is the result:

It is good to know the standard deviation, because we can say that any value is:

The number of standard deviations from the mean is also called the "Standard Score", "sigma" or "z-score". Get used to those words!

Example: In that same school one of your friends is 1.85m tall

It is also possible to calculate how many standard deviations 1.85 is from the mean

So to convert a value to a Standard Score ("z-score"):

And doing that is called "Standardizing":

A survey of daily travel time had these results (in minutes):

Here are the first three conversions

And here they are graphically:

You can calculate the rest of the z-scores yourself!

The z-score formula that we have been using is:

And this is how to use it:

Here are the first three conversions using the "z-score formula":

The exact calculations we did before, just following the formula.

It can help us make decisions about our data.

Here are the students' results (out of 60 points):

The test must have been really hard, so the Prof decides to Standardize all the scores and only fail people more than 1 standard deviation below the mean.

It also makes life easier because we only need one table (the Standard Normal Distribution Table), rather than doing calculations individually for each value of mean and standard deviation.

Here is the Standard Normal Distribution with percentages for every half of a standard deviation, and cumulative percentages:

Example: Your score in a recent test was 0.5 standard deviations above the average, how many people scored lower than you did?

So the total less than you is:

In theory 69.1% scored less than you did (but with real data the percentage may be different) 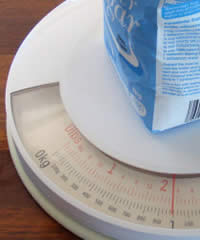 A Practical Example: Your company packages sugar in 1 kg bags.

When you weigh a sample of bags you get these results:

The normal distribution of your measurements looks like this:

It is a random thing, so we can't stop bags having less than 1000g, but we can try to reduce it a lot.

So let us adjust the machine to have 1000g at −2.5 standard deviations from the mean.

Now, we can adjust it to:

Let us try both.

Adjust the mean amount in each bag

Adjust the accuracy of the machine

So the standard deviation should be 4g, like this:

(We hope the machine is that accurate!)

Or perhaps we could have some combination of better accuracy and slightly larger average size, I will leave that up to you!

Use the Standard Normal Distribution Table when you want more accurate values.