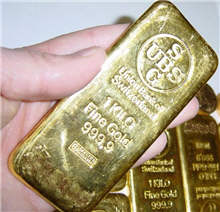 How heavy something is. The downward force caused by gravity on an object.

Weight and Mass are different things, but weighing scales are designed to estimate the mass sitting on them and so (instead of units of force) it is common to use units of mass like these:
• grams, kilograms and tonnes (in Metric)
• ounces, pounds and tons (in US units)

This bar of gold has a mass of 1 kg:
• weighing scales under steady conditions here on Earth will also show 1 kg
• but on the Moon they would show 0.165 kg