It is called "electromagnetism" because electricity and magnetism are linked:

So electricity and magnetism are linked in an ongoing dance.

This effect heads off through space at the fastest speed possible: the speed of light.

Here is the full electromagnetic spectrum:

The spectrum is continuous with no sudden changes or boundaries.

So some waves pass right through our bodies, others get reflected or absorbed at different rates. 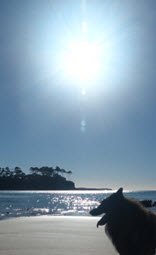 Example: From The Sun

A lot of the the radiation from the Sun gets reflected or absorbed by the atmosphere.

get all the way through:

Imagine: if our eyes could only see X-rays the sky would be black!

So telescopes like the NuSTAR X-ray telescope have to be in orbit.

We like to think of the spectrum as having these ranges:

There is disagreement on the exact range values (for example X-Rays from an X-ray tube and Gamma rays from radioactive materials overlap) but here is a handy guide:

See Units in Equations for more about nanometers, picometers, etc.

That is 300 million meters every second, or:

But the speed can be slower ...

At slower speeds the wavelength is shorter for the same frequency.

We can work out the wavelength:

In a vacuum the wavelength is:

In water the wavelength is:

The wavelength is different but the light stays the same color as the frequency is the same.

Important: the wavelengths mentioned on this page are for a vacuum. Adjust them like above if not.

Try adjusting the sliders on this demo and see how the top of a wave moves the same speed (which is actually billions of times slower than reality):

Try this: Walk across the room in 5 seconds:

What is the frequency of your steps in each case?

Now try that again but take 20 seconds to cross the room. What happens?

A higher frequency (rate of vibration) has shorter wavelength and more energy.

Example: Which has more energy, light or X-rays?

X-rays have more energy, with frequencies around 1018, compared to light around 1014

Example: Which has more energy, red light or blue light?

Blue light has higher frequency (with shorter wavelengths), so has more energy than red.

Gamma rays, x-rays, and some ultraviolet waves have such high energy that they are "ionizing," meaning they can knock electrons out of atoms.

This makes atoms charged and more likely to form new chemical reactions, which can be harmful to our cells, killing them or changing them so they grow out of control and form cancer.

How to remember the spectrum?

To remember the energy and danger levels, think:

So it is like a particle and also like a wave. This is called the "wave–particle duality".

Einstein wrote about it: