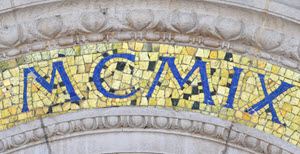 Romans Numerals are based on the following symbols:

To Remember: After Larger is Added

Don't use the same symbol more than three times in a row (but IIII is sometimes used for 4, particularly on clocks)

How to Convert to Roman Numerals

Break the number into Thousands, Hundreds, Tens and Ones, and write down each in turn.

Think "MeDiCaL XaVIer".
It has the roman numerals in descending order from 1000 to 1.

Numbers greater than 1,000 are formed by placing a dash over the symbol, meaning "times 1,000", but these are not commonly used: