Speed is how fast something moves.

Velocity is speed with a direction.

Saying Ariel the Dog runs at 9 km/h (kilometers per hour) is a speed.

But saying he runs 9 km/h Westwards is a velocity.

Imagine something moving back and forth very fast: it has a high speed, but a low (or zero) velocity.

Speed is measured as distance moved over time.

Example: A car travels 50 km in one hour.

We can also use these symbols: 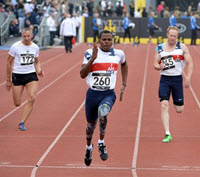 Speed is commonly measured in:

The examples so far calculate average speed: how far something travels over a period of time.

But speed can change as time goes by. A car can go faster and slower, maybe even stop at lights.

So there is also instantaneous speed: the speed at an instant in time. We can try to measure it by using a very short span of time (the shorter the better).

Example: Sam uses a stopwatch and measures 1.6 seconds as the car travels between two posts 20 m apart. What is the instantaneous speed?

Well, we don't know exactly, as the car may have been speeding up or slowing down during that time, but we can estimate:

It is really still an average, but is close to an instantaneous speed.

When the speed does not change it is constant.

For constant speed, the average and instantaneous speeds are the same.

Velocity is speed with a direction.

It is actually a vector ...

... as it has magnitude and direction

Because the direction is important velocity uses displacement instead of distance:

Velocity = Displacement Time in a direction.

You forgot your money so you turn around and go back home in 120 more seconds: what is your round-trip speed and velocity?

Yes, the velocity is zero as you ended up where you started.

Next time you are out walking, imagine you are still and it is the world that moves under your feet. Feels great.

It is all relative!